Psilocybe cubensis is a species of psychedelic mushroom whose principal active compounds are psilocybin and psilocin. Commonly called shrooms, magic mushrooms, golden tops, cubes, or gold caps, it belongs to the fungus family Hymenogastraceae and was previously known as Stropharia cubensis. It is the most well known psilocybin mushroom due to its wide distribution and ease of cultivation.

The species was first described in 1906 as Stropharia cubensis by Franklin Sumner Earle in Cuba.[1] In 1907 it was identified as Naematoloma caerulescens in Tonkin by Narcisse Théophile Patouillard,[2] while in 1941 it was called Stropharia cyanescens by William Alphonso Murrill in Florida.[3] These synonyms were later assigned to the species Psilocybe cubensis.[4][5]

The name Psilocybe is derived from the Greek roots psilos (ψιλος) and kubê (κυβη),[6] and translates as “bare head”. Cubensis means “coming from Cuba”, and refers to the type locality published by Earle. Colloquially, some strains of P. cubensis are known as ‘penis envy’[7] for its shape. 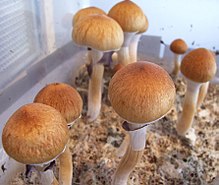 Psilocybe cubensis is probably the most widely known of the psilocybin-containing mushrooms used for triggering psychedelic experiences after ingestion. Its major psychoactive compounds are:

Individual brain chemistry and psychological predisposition play a significant role in determining appropriate doses. For a modest psychedelic effect, a minimum of one gram of dried Psilocybe cubensis mushrooms is ingested orally, 0.25–1 gram is usually sufficient to produce a mild effect, 1–2.5 grams usually provides a moderate effect, and 2.5 grams and higher usually produces strong effects.[10] For most people, 3.5 dried grams (1/8 oz) would be considered a high dose and may produce an intense experience; this is, however, typically considered a standard dose among recreational users. For many individuals, doses above three grams may be overwhelming. For a few rare people, doses as small as 0.25 gram can produce full-blown effects normally associated with very high doses. For most people, however, that dose level would result in virtually no effects. Due to factors such as age and storage method, the psilocybin content of a given sample of mushrooms will vary. Effects usually start after approximately 20–60 minutes (depending on method of ingestion and stomach contents) and may last from four to ten hours, depending on dosage. Visual distortions often occur, including walls that seem to breathe, a vivid enhancement of colors and the animation of organic shapes.[citation needed]

The effects of very high doses can be overwhelming depending on the particular phenotype of cubensis, grow method, and the individual. It is recommended not to eat wild mushrooms as they may be poisonous.[11]

In 1978, the Florida Supreme Court ruled in Fiske vs Florida that possession of psilocybin mushrooms is not illegal, in that the mushrooms cannot be considered a “container” for psilocybin based on how the law is written, i.e., it does not specifically state that psilocybin mushrooms themselves are illegal, but that the hallucinogenic constituents in them are. According to this decision, the applicable statute as framed imparts no information as to which plants may contain psilocybin in its natural state, and does not advise a person of ordinary intelligence that this substance is contained in a particular variety of mushroom. The statute, therefore, can not constitutionally be applied to the appellant.[16][17]

Personal-scale cultivation of Psilocybe cubensis mushrooms ranges from the relatively simple and small-scale PF Tek and other “cake” methods, that produce a limited amount of mushrooms, to advanced techniques utilizing methods of professional mushroom cultivators. These advanced methods require a greater investment of time, money, and knowledge, but reward the diligent cultivator with far larger and much more consistent harvests.[citation needed]

Terence and Dennis McKenna made Psilocybe cubensis particularly famous when they published Psilocybin: The Magic Mushroom Grower’s Guide in the 1970s upon their return from the Amazon rainforest, having deduced new methods (based on pre-existing techniques originally described by J.P. San Antonio[18]) for growing psilocybin mushrooms and assuring their audience that Psilocybe cubensis were amongst the easiest psilocybin-containing mushrooms to cultivate.[19]

Potency of cultivated specimens can vary widely in accordance with each flush (harvest). In a classic paper published by Jeremy Bigwood and M.W. Beug, it was shown that with each flush, psilocybin levels varied somewhat unpredictably but were much the same on the first flush as they were on the last flush; however, psilocin was typically absent in the first two flushes but peaked by the fourth flush, making it the most potent. Two strains were also analyzed to determine potency in caps and stems: In one strain the caps contained generally twice as much psilocybin as the stems, but the small amount of psilocin present was entirely in the stems. In the other strain, a trace of psilocin was present in the cap but not in the stem; the cap and stem contained equal amounts of psilocybin. The study concluded that the levels of psilocybin and psilocin vary by over a factor of four in cultures of Psilocybe cubensis grown under controlled conditions.[20]

With cow dung being the preferred habitat of Psilocybe cubensis, its circumtropical distribution is largely encouraged, if not caused, by the worldwide cattle ranching industry.[21]

Because Psilocybe cubensis is intimately associated with cattle ranching, the fungus has found unique dispersal niches not available to most other members of the family Strophariaceae. Of particular interest is the cattle egret (Bubulcus ibis), a colonizer of Old World origin (via S. America), whose range of distribution overlaps much of that of Psilocybe cubensis. Cattle egrets typically walk alongside cattle, preying on insects; they track through spore-laden vegetation and cow dung, and transfer the spores to suitable habitat, often thousands of miles away during migration activities. This type of spore dispersal is known as zoochory, and it enables a parent species to propagate over a much greater range than it could achieve alone. The relationship between cattle, cattle egrets, and Psilocybe cubensis is an example of symbiosis—a situation in which dissimilar organisms live together in close association.[22]

There are no reviews yet.

Only logged in customers who have purchased this product may leave a review.

No products in the cart.